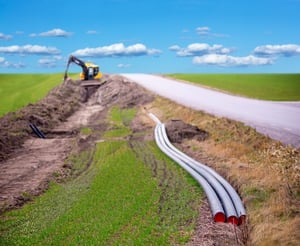 The FCC’s Course Correction to Accelerate Deployment in 2018

While there have been many achievements in the long battle to close the digital divide, much work remains.
The FCC’s 2018 Broadband Deployment Report, published on February 2, 2018, states that 92.3% of all Americans now have access to fixed terrestrial broadband as of year-end 2016 (at the regulatory minimum speeds of 25 Mbps/3 Mbps).

However, there is still room for improvement: 24 million Americans remain without baseline broadband access. These underserved Americans are primarily located within rural areas or on tribal lands.

During the two-year period of 2014 to 2016, new broadband deployments decreased by 55 percent, new mobile deployments dropped 83 percent, and the pace of Americans gaining access to both fixed terrestrial broadband and mobile broadband was nearly three times slower.

Led by Chairman Ajit Pai, the FCC’s position is that this dramatic slowdown in broadband deployment is largely the result of the 2015 Title II Order, which established net neutrality. The FCC’s report describes the steps taken to breathe new life into nationwide broadband deployment.

The Title II Order regulated broadband Internet access service as a utility. The intention behind the order’s strict net neutrality rules was to ensure that internet providers could not interfere with or disadvantage consumers or the companies whose sites and apps they want to access. It ensured that internet providers could slow down service only for "reasonable network management" — not a business purpose.

However, the order also effectively stifled innovation by requiring ISPs to submit proposals to the FCC for new business models. To consider the impact of these regulations, companies like Facebook and T-Mobile were required to request permission from the FCC to launch new apps and services. The review process and long debates dragged on for months, establishing regulatory uncertainty within the industry.

To illustrate the impact that Title II had on broadband deployment, the FCC offered the following statistics:

Past Deployment Success: From 2012 to 2014, the two years preceding the Title II Order:

Deployment Stall After Title II: From 2014-2016, following the adoption of Title II Order:

Acting to Speed Up Broadband Deployment

In its 2018 Broadband Deployment Report, the FCC made the case that overturning the 2015 Title II order for net neutrality will help large telecommunications and cable companies to make capital investments to enhance broadband availability.

Last December, the FCC voted to remove the restrictions barring ISPs from slowing down or speeding up web traffic based on business relationships, and on February 22, 2018, the FCC formally overturned the 2015 Title II Order. In its place, the FCC has published the “Restoring Internet Freedom Order,” which replaces the previously restrictive regulations with a “light-touch regulatory framework” that requires ISPs to publicly disclose their practices to enable customers to make informed choices. The new order will take effect on April 23.

Our next blog post in this series will look at additional steps the current FCC is taking to prioritize broadband deployment to all Americans.