The Rise of Distributed Antenna Systems: The Impact on Joint Use Assets 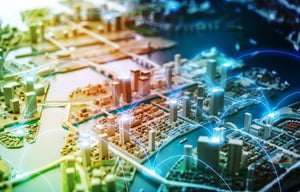 Distributed antenna systems (DAS) were the original small cells. First used more than 30 years ago, DAS began as a solution to provide wireless coverage in areas where there was none.

Today’s DAS networks help fill in holes where wireless coverage is weak and boost the capacity of traditional networks in high-traffic areas.

Ideal settings for DAS include:

Instead of building a new tower, operators install a network of connected DAS nodes that are linked, often by fiber, to a central communications hub. These low-powered antennas are the size of a fire alarm or smoke detector, and cover a short range of less than a half-mile.

DAS and Joint Use Assets

DAS are typically installed on existing infrastructure such as  utility poles, streetlights, and buildings. Of these options, utility poles are at the top of the list: as they are widely installed (for fast deployment), readily available (where space remains), and highly stable. DAS can be installed alongside other attachments and power, reducing the need for additional supporting attachments  and minimizes the physical and visual impact.

By the end of 2018, sixteen million DAS nodes will be deployed. One of the most significant concerns with relying on utility poles for DAS installations is the increasing crowding on poles and the lack of available space as this and other technologies – like the newer small cell attachments – continue to grow in response to increased wireless demands.

The Difference Between DAS and Small Cells

While DAS has been in use for decades, small cells are a much more recent technology. While both systems are similar regarding power output, coverage areas and size, there are substantial differences between the two.

DAS are carrier-neutral, meaning multiple carriers can use a single node, and nodes can handle many frequencies (including 2G, 3G and 4G commercial frequencies, public safety, UHF and VHF bands). They were designed to scale to meet the needs of a growing network, and aren’t ideal for low-density applications.

Small cells are primarily single-carrier and single-frequency technologies, although this is changing with ongoing advancements. They are designed to deliver coverage and capacity over a relatively small area (like a Wi-Fi access point) and are better suited for a single carrier.

While the best technology choice will vary from one situation to the next, the best solution may be a combination of DAS and small cells.

What is the future of DAS?

According to TechSci Research report, the global DAS market is projected to grow at a compound annual growth rate of more than 13 percent from now to 2021. This growth is the result of increasing mobile data traffic coupled with growing need for ongoing connectivity. Considering this rapid growth, ABI Research predicts that between 2014 and 2019, DAS will represent more than 60 percent of the in-building wireless market.

The volume of attachments on our infrastructure is rapidly increasing.
Are you poised to manage the influx of requests?

Continue the conversation in the comments below.