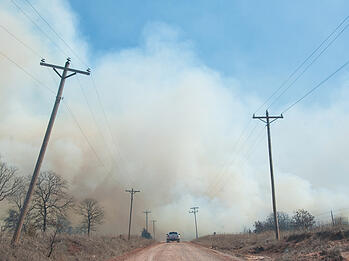 On average, there are between 60,000 and 80,000 wildfires that occur in the United States each year, burning anywhere from 3 million to almost 10 million acres of land as they spread across the nation1. With temperatures on the rise throughout the country, and drought conditions becoming more commonplace in certain areas, wildfires pose an increasing threat to people, homes and even utility poles. While wildfires can be ignited by lightning, campfires, matches or fireworks, they can also be ignited by utility poles themselves, making protecting these assets from fire even more important. Utility companies are working to limit the potential of causing wildfires in addition to safeguarding their utility poles in the following ways:

Regular tree trimming and herbicide applications can help prevent damage, but many utilities are going further by grubbing utility poles. This involves clearing all of the plants and brush from around a pole’s base, creating a clear space surrounding the utility pole to protect it from flames. Idaho Power is one such utility company who has been employing this method and seeing positive results. Crews work with machines as well as by hand to create up to 20 feet of defensible space surrounding their poles. They have been doing so since 2006 and the technique has proven successful: they reported the loss of only one utility pole due to wildfires in the locations where they have been grubbing2.

In 2007, fallen utility poles from Santa Ana winds were to blame for wildfires that burned more than 4,500 acres of land in the Malibu Canyon area of California. The poles in question were discovered to have been overloaded – containing more electrical wires and assets than they were structurally designed to hold. In response to this, the California Public Utility Commission is enforcing new rules regarding the load weights that poles must be designed to support, as well as the wind speeds they must be designed to withstand3. Regardless of the new regulations, it is important that utilities stay under mandated load limitations for utility poles in order to avoid many potential safety hazards, including wildfires.

One way to avoid poles breaking and causing fires is by ensuring they are in good condition. Utility pole inspections are used to detect rot and decay and determine the current load to ensure they are not above capacity. This information can be very important in the case of liability for wildfire incidents. A company can prove it was operating under due diligence if a pole falls over due to Santa Ana winds, for example. Fire incident data can also prove beneficial to track. By tracking wildfire incidents, companies can analyze fire risk based on utility pole locations, and prioritize vegetation management and other wildfire risk-reduction activities. This data can even be used to determine the safest new potential pole locations as needed.