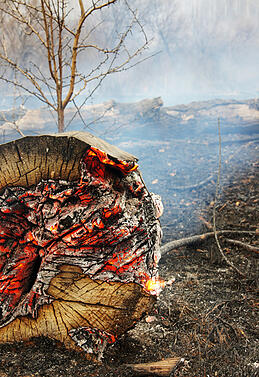 Three downed utility poles in Malibu, CA resulted in the burning of more than 4,521 acres, the payment of $63.5 million in settlement agreements and now, a long list of new rules adopted by the California Public Utility Commission (CPUC)[1]. California is one of a few states that writes its own utility codes, and does not adhere only to the National Electric Safety Code (NESC).

It was in 2007 that strong, Santa Ana winds swept through Malibu Canyon, toppling three utility poles jointly-owned by 4 local carriers[2]. Sparks from live electrical wires on the downed utility poles ignited nearby brush, causing a destructive fire that blazed through the area, damaging dozens of structures and vehicles in its path. After an investigation of the fire, it was found that one of the poles was 50 years old and overloaded with electrical equipment and wires. This was not the only occasion in which utility poles were to blame for large fires in California in recent years. Notably, multiple brush fires destroyed 200,000 acres and more than 1,300 homes in San Diego County in 2007[3].

Almost seven years later, the CPUC has approved new rules (in a 4-0 vote, with one abstention[4] in hopes to strengthen overhead utility poles and protect the public. These include:

These rules are in addition to those established in 2012, which increased vegetation clearance areas and mandated that loads on poles be recalculated whenever new significant installations are mounted[5].

A 2013 study of Southern California Edison’s utility poles, which was commissioned following concerns of the fires caused by downed poles, found that 22.3% of the 5,006 poles examined failed to meet state utility standards. Based on that number, more than 313,000 of the company’s 1.4 million poles will likely need to be repaired or replaced[6]. A plan has been put in place to replace 35,000 poles a year through 2022.

In addition to repairing or replacing poles, the four companies involved are said to be working together to improve pole-loading practices. “We are working with the communication companies we share poles with throughout our service territory to better coordinate and improve pole loading practices,” SCE President Ron Litzinger said in an Edison news release[7]. “Our focus is on continually improving our process for loading, inspecting, maintaining and replacing poles to further protect the public and enhance electric service reliability.”