Happy 100th Birthday to the NESC! 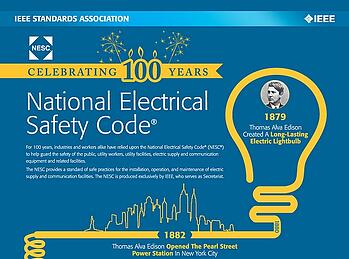 We would like to pause for a moment to celebrate the birthday of one of the most influential forces in the Utility industry: the National Electric Safety Code (NESC). First introduced in August of 1914, the document hits a healthy 100 years in existence this month.

Mike Hyland, NESC chair, in a press release from IEEE, stated "2014 is a major milestone for the NESC, which has continually evolved in the last century and quite literally helped save lives. To remain realistic, practical and useful in the face of new developments, technologies and challenges in the industry, NESC is constantly being refined. Today’s NESC is a relevant, essential resource that protects the public, electrical professionals, equipment and property."[1]

In light of this milestone anniversary, we present a short list of electricity's earliest, greatest hits:

1889: The National Association of Regulatory Utility Commissioners (NARUC) is founded.

1893: The Westinghouse Electric Company wows the nation by lighting the Chicago World's Fair. The event has actually been referred to as "The War of the Currents", as General Electric (in collaboration with Edison) proposed illuminating the event with direct current. When Westinghouse's alternating current won out, the demonstration became an early example of the safety and reliability of AC.[4]

1914: The National Bureau of Standards publishes the first NESC resource.[5]

To learn more, check out this great infographic produced by the IEEE that chronicles the history of electricity from discovery to present day.[6] Life-saving and industry-setting, this reference, produced exclusively by IEEE, goes through a rigorous review process every five years to keep the code up-to-date and useful for the protection of the public, electrical professionals, equipment and property. This year is no different of course, though we are excited to add that the IEEE has also happily embraced 21st century social technology: For additional fun facts and tidbits, follow #NESC100 on Twitter.