Bring out Your Dead: Tracking, Treatment of Defective Plug-in Assets

During inventory in the world of central office (CO), our experts see all kinds of interesting situations regarding plug-in assets and other equipment inside central offices and remote terminals. Thousands of dollars worth of plugs stacked up, touching one another, deemed no good due to lack of electrostatic discharge protection. Manufacture discontinued plugs being “hoarded” rather than identified and cataloged because perhaps someone is worried another one like it would not be easy to get.

Plugs packed and shipped improperly, in non-padded boxes, without ESD bubble wrap, stacked incorrectly on top of each other, or items tagged to completely different sites than the one where they currently reside. As we said, all kinds of interesting things.

One of the most difficult and maddening situations found in telecommunications central offices however may be the mixing of defective and operational plugs. “We’ll find stacks of stuff, and ask the staff, 'What are these?’” says Alden’s Suzanne Knott.

This scenario happens frequently and can happen easily. A technician on a mission and with moments to spend in each CO comes in on a call, repairs the issue he or she has been summoned to fix, and in unpacking a new plug-in asset from its box to replace non-functioning equipment, tosses the box aside and casually sits the defective plug on a table or cabinet. The technician then turns and leaves, perhaps not visiting that location again for a few days. Suddenly, the discarded plug becomes a troubling unknown. “When the good and the bad get mixed up together—say a tech doesn’t keep track of what’s good and bad in his office—and we send that plug back as a good plug-in asset and it goes back out into the field somewhere else as a good plug, but it’s defective, that can cause all kinds of problems, including service disruption,” says Knott.

So, what can you do to keep the bad and the good from mixing?

It may take a few moments, but ensuring technicians document that a plug is defective in your company’s asset management software can mean the difference between a good operations day and a future bad one, when and if that bad plug resurfaces in a mission critical situation.

Send bad assets out the door

Once the bad plug has been documented and its location and status recorded, during the next inventory sweep, the unusable equipment can be sent on its way, without question or concern that a “good” plug is being removed from a location where it might be useful.

Record the replacement asset in inventory

Finally, when a replacement plug has been procured, it too should be entered into inventory management software so that it may start its well-documented journey from warehouse to CO to service to decommission when the time comes—all without anyone wondering “is this ‘good’ or ‘bad?’”

What can happen if none of this is done?

“Not recording items is how stuff gets lost, how things get written off that do not need to be, and how companies lose thousands of dollars in assets,” says Knott, making recording and tracking the whereabouts of defective plugs just another small thing that can add up to big financial losses if not kept in check.

Ready to get started with a asset management system geared toward the needs of ISP? Click here. 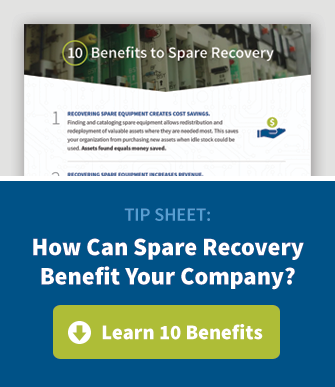