Three Big Things That Will Impact Infrastructure Asset Management in 2016

Happy New Year to the utility and infrastructure asset management world! 2015 gave us lots to say about backlogs and field assessments, NESC violations, and the ever-turning field asset management cycle. 2016 will, we know, pose new challenges. So in this, the first few weeks of the new year, we would like to start things off right by looking ahead at what topics we think will be regularly filling your inboxes and newsfeeds.

The Threat of Terrorism

With vicious attacks in Paris, Beirut, Nigeria, and Turkey (among others) making news throughout 2015, national security has become an urgent topic of discussion in the utility industry. As the keepers of critical infrastructure, pole owners and municipalities will be called upon to make security a priority in 2016. Particularly important will be the linking of field and information technology into a vital, seamless flow of information that keeps pole owners aware of vulnerabilities possible on both the equipment and information side of operations. This article in Intelligent Utility offers some great tips on the importance of communication and collaboration to public safety.

The Continued Expansion of Fiber

In 2015, there was a lot of buzz about whether broadband internet should be considered a "utility"—a designation the FCC voted to enact in June of last year. But the Net Neutrality act did not just affect Title II restrictions when it comes to broadband; it also contained a provision in which the FCC would allow some cities to expand their municipal internet services and generally opened the door to expansion of high-speed internet—and fiber installation—all over the U.S. Google has six new cities on the map with 11 more coming for their fiber service and AT&T and Comcast are also in the mix. While the latter two slowed their installation plans in late 2015, it is a safe bet that in 2016 fiber will be slated to reach millions of more homes in every corner the U.S., meaning a foreseeable upswing in installation and requests to attach. Clear your backlogs, if they exist, do your field assessments and get ready for more.

The National Electrical Safety Code’s upcoming revision is not set to drop until early 2017, but in the interest of proactivity, understanding—and being ready—for pending changes is just good business. According to various news outlets, while the NESC has not published the exact list of edits to the code yet, they have released some hints as to possible inclusions. A few to take note of are:

Welcome to Infrastructure Asset Management in 2016.

We hope it will be a productive year. Given the above items, we know it will be an interesting one. Join us here, as always, to hear about what is on our radar at Alden and what is going on in the your world of bringing communication, entertainment, and power to ours.

Let's discuss: What are the top priorities or initiatives at your organization in 2016? Answer in the comments. 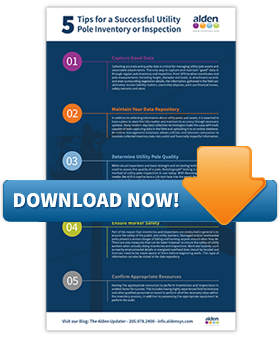