The Good Old Bad Old Days: Joint Use 50 Years Ago and Today Picture this: the year is 1966. Lyndon Johnson is President. A box of corn flakes costs a cool 39 cents. Star Trek graces the airwaves for the first time and the Orioles take the Major League pennant. Joint use is a much simpler thing. Parity exists.

Fifty years ago, the U.S. was a different place in many ways, from technology to entertainment to communication. Utility poles themselves looked much the same as they do now, but their owners were less diverse. Things have changed… a lot. What is frightening, however, is that some joint use contracts have been in place since 1966, if not earlier. We are always a little surprised when we discover this, and it makes us think about just how much our joint use world has changed over the last 50 years—and how the joint use of yesteryear absolutely cannot be the joint use of today.

Here are a few old-school things that would not fly in 2016:

In the days of dittos, before even fax machines and certainly before the "cloud" was anything more than a name for fluffy things in the sky, joint use contracts were typed up on paper, duplicated, and manually delivered between pole owners and attachers. "Search" was something office staff did with their eyes, line-by-line, page-by-page, when looking for a detail. Contract revision was done via typewriter ribbon, correction fluid in hand. This still goes on in your office sometimes, you say? Interesting.

Fast-forward to 2016: Digital contracts have been the norm for some time, but using joint use management software to catalog, distribute, and regularly review and revise contracts is more efficient, results in less data loss, and allows staff to more easily update and communicate changes with attachers when needed, saving time and money.

When there were only two pole owners and one additional attaching company in town, Bill from the city could phone up Joe from from the telephone company to discuss whose assets were where -- there were fewer to track and maintain. They "knew" the landscape and were likely to remain in their positions for many more years, so no one else needed the information.

Fast-forward to 2016: The world is not nearly as small and the need for documentation has increased alongside the sheer number of requests, assets, regulations, and moving pieces of joint use administration. For legal and organizational reasons, getting data recorded in a format that is easy to quickly locate is paramount today.

In 1966, the population of the U.S. was 196,560,338. Today, it is over 322 million. Fewer people means fewer electrical, telephone and other hookups, which means fewer poles and attachments in the field. In smaller municipalities and co-ops, in 1966, it may have been physically possible to manually keep track of the data from that smaller number of assets.

Fast-forward to 2016: According to the U.S. Census Bureau, the population of the U.S. grew 2.4 million people just in 2015. Additionally, construction is booming around the U.S., DAS, and broadband internet, not to mention cable and cell phone company equipment has come to roost on utility poles, and the days of being able to manually keep track of asset and relationship data are long gone. Thankfully, field capture devices, online joint use platforms, and seamless data sharing between many systems is possible today.

Just as those above-mentioned 50-year-old contracts sorely need updating to reflect modern pricing, relationships, and new regulations, joint use itself simply could not operate today the way it did in 1966. Our advice: if your company is feeling a little throwback—even on days that are not  wear-your-bellbottoms-to-work days—you may want to step into the 21st century and avail yourself of all the efficient, intuitive, seamless offerings a good managed services provider can bring to the table. 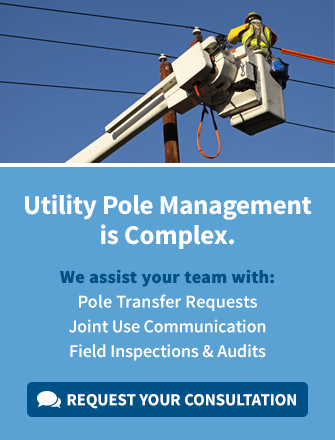