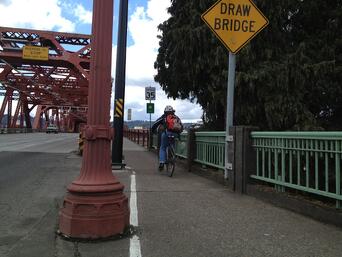 How much does it cost to move a utility pole? About $2,208 an inch in Portland, Ore. where one such pole had to be shifted a total of eight inches (for a total of $17,664). Not to mention, of course, the cost of labor in addition to the cost in inconvenience to drivers who had to find a new route when the street where the pole is located was closed to traffic. The pole in this matter (which supports overhead streetcar wires) was originally installed on the city’s Broadway Bridge bike/walk path, significantly narrowing one of the area’s busiest bikeways — based on summer 2011 bike counts, the Broadway Bridge averaged 4,335 weekday bike trips.1

"It was a mistake," Cheryl Kuck, spokeswomen for the Portland Bureau of Transportation, said about the pole’s placement. Utility engineers "didn't realize what kind of impact it would have on the safety needs of bicyclists and pedestrians."

Rob Sadowsky, the executive director of Portland’s Bicycle Transportation Alliance, knows firsthand the potential impact utility poles can have on cyclists. In 2011, he was biking with Seattle’s Cascade Cycling Club on the Morrison Bridge when ran into a utility pole after coming off its loop ramp, breaking his clavicle and three ribs. (He has since requested that the pole be painted with a large yellow stripe to make it more visible.)2

While the utility pole and its location went thought the proper engineering analysis and approval channels before being installed, its hazardous positioning among bicyclists and pedestrians was overlooked. This situation highlights the importance for all utility pole owners to pay close attention to surrounding environmental details when pole locations are concerned. To be fair, the utility pole was legally placed. However, it was placed in complete disregard to path users — and those path users were not quiet with their concerns. It was ultimately the public’s complaints that elicited a re-evaluation of the utility pole placement.

Aside from bicyclers, utility poles can become obstacles for wheelchair users, or others, and this is where illegality issues can really come into play. Sidewalk planning must comply with accessibility standards laid out by state codes and the American Disabilities Act guidelines that include adequate sidewalk width, and utility poles can often create obstacles within the path. (Wheelchair users need approximately 5 ft. to turn around and 6 ft. to pass other wheelchairs.)3

The reality is that there are accessibility issues and design constraints that must be considered regarding the placement of utility poles today, but there is generally a solution to satisfy both utility pole owners and the public in conflicting utility pole location situations. For the pole on Broadway Bridge in Portland, Ore., it would have been best to fully analyze its original placement implications in order to avoid the cost of moving the pole, but ultimately a solution was found: a metal plate was placed under the pole and anchored to the current installation footings allowing the pole to be moved 8 inches to the south, widening the bike and pedestrian pathway.